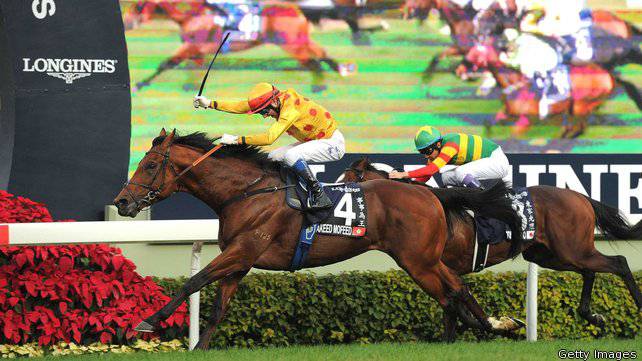 Akeed Mofeed, multiple Group One winner of both the 2013 Hong Kong Derby and 2013 Hong Kong Cup, has been retired from racing and will stand at Goldin Farms, Lindsay Park in South Australia.

Andrew Perryman, stud manager at Goldin Farms, Angaston said a band of more than 40 broodmares would be waiting when the star racehorse began his stud season.

Mr Perryman has spent in excess of $2 million in the past six weeks on behalf of Goldin Farms buying broodmares who will be sent to Akeed Mofeed.

“We have been able to purchase some wonderful broodmares whose bloodlines should be an excellent cross with the stallion,” Mr Perryman said.

Having considered the time necessary for full recovery, his owner Mr Pan Sutong decided to retire him after taking HKJC veterinary advice, so that he is best prepared for the forthcoming breeding season in Australia.

“Akeed Mofeed is an outstanding physique with an excellent temperament,” Gibson said.

“He finished on equal race terms with Horse of the Year Military Attack and beat the highest rated turf horse of the season in Cirrus Des Aigles. Against the world’s best in Dubai, he was the pick of the paddock,” expressed Gibson.

Mr Perryman, who has just returned from Hong Kong, said he was really excited about the arrival of Akeed Mofeed.

“I saw him several times while in Hong Kong and he is a stunning individual and has a superb temperament,” he said.

“All the top stallions have outstanding temperaments which they onpass to their progeny.

“Akeed Mofeed was a top European group performer at two and three and then went on to become a champion in Hong Kong.”

Mr Perryman said it was planned to have Akeed Mofeed available to Australian breeders and details would be released shortly.

“Being one of the highest rated sons of Dubawi I am sure he will be well received by the top Australian breeders as few stallion masters will be able to match his physique and pedigree.”

Mr Perryman said he would be heading to England shortly to explore the possibility of Akeed Mofeed being a shuttle stallion and also standing in the northern hemisphere.

“He has tremendous European appeal through his breeding and with an excellent race record and magnificent conformation is certain to be keenly sought.”