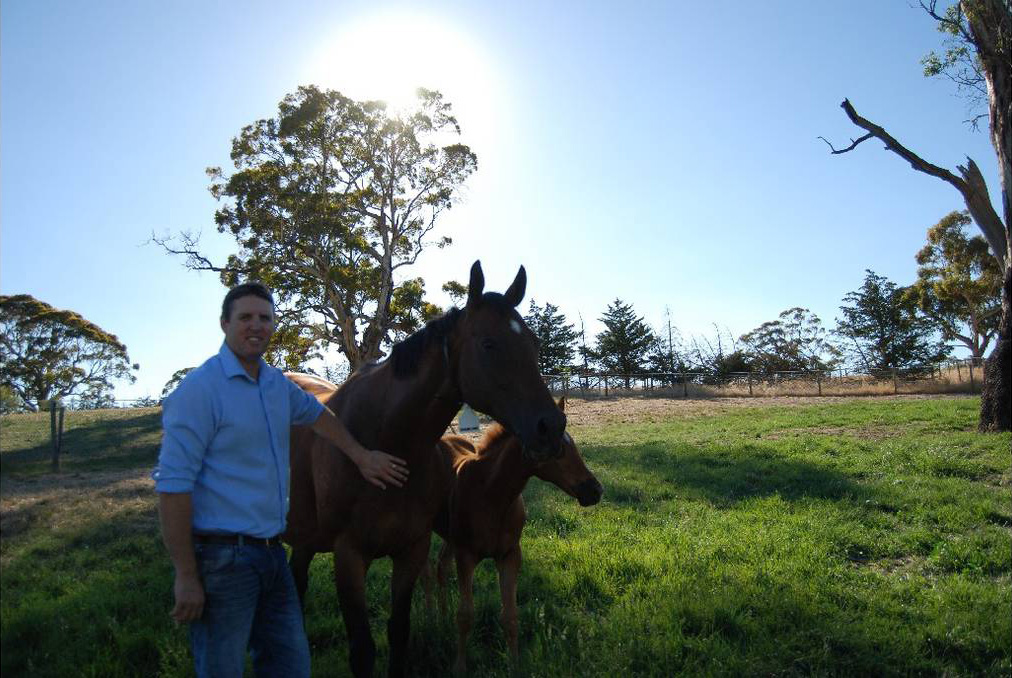 STUD MANAGER: Andrew Perryman, at Goldin Farms, with the mare Cascade and her filly foal by the stallion Host.

Born and raised in the South-East and from a strong racing family, Perryman, has worked for some of the world’s most famous thoroughbred studs.

Most recently with the Australian arm of Darley through Woodlands at Denman in New South Wales, Perryman has worked in Ireland and the United States with Coolmore and Juddmonte Farms.

During his tenure as stud manager of two breeding operations from 2006 to 2013, he supervised the rearing of bloodstock owned by Ingham Bloodstock and Sheikh Mohammed’s Darley Woodlands operation.

Perryman said he was excited about his role with Goldin Farms, owned by the Goldin Group managed by Mr Pan Sutong.

“Lindsay Park is an ideal equine environment with a long tradition and established reputation for breeding and training racehorses of the finest bloodlines,” Perryman said.

“I am very impressed by Mr Pan’s vision and his desire to contribute to the breeding industry in South Australia.”

“He will be the foundation stallion,” Perryman said. “But it is not yet decided if Akeed Mofeed will stand in 2014 or race on and be retired in 2015.

“We already have about 12 mares and several foals but the numbers will be kept small for the present while work is done on bringing the property back up to the showcase level it once was.It is planned to sell the current foals but the mares have been purchased to be eventually mated with Akeed Mofeed.”

“We are happy to have Andrew join us at Goldin Farms,” Mr Pan said.

“We trust that his experience and expertise in managing stud farms as well as breeding operations would help Goldin Farms uphold Lindsay Park Stud’s reputation as a world-class breeding and training complex that draws accolades from industry experts around the globe.”