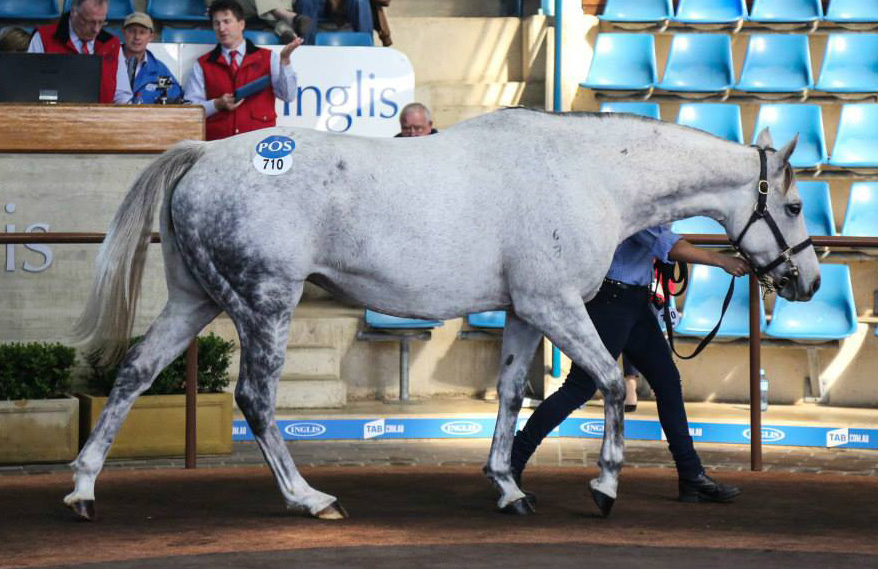 The $340,000 sale of Listed winner Bacchanal Woman (Encosta De Lago) in foal to Sepoy (Elusive Quality) yesterday to Goldin Farms was the highlight of the final day of the select broodmare section of the Inglis Australian Broodmare and Weanling Sale.

The session concluded a four-day run at Inglis during which more than $23,000,000 was traded on weanlings, broodmares and stallion shares. However, while an increase in the number of lots catalogued to the platinum and select sessions of the weanling sale contributed to a rise in aggregate of 32 per cent to $5,803,350, the select broodmare session suffered decreases across the board.

“Vendors were rewarded by getting first crack at the weanling market and offering their fillies and mares to breeders wanting to buy at this sale so they can secure spots to the stallions that are quickly booking out at Australia’s leading studs,” said Inglis’ national
bloodstock director, Jonathan D’Arcy.

“Good quality weanlings and broodmares have been well received with a lot of horses exceeding their reserves. Ending the sale with a total clearance rate of 80 per cent for the week is a great start to the breeding stock sales season and we look forward to trading further weanlings and mares at the Great Southern Sale in June.”

“She’s correct, with good bone, she’s a quality horse with a great body to her and she’s a stakes-winning sprint mare, so it was an obvious choice,” Perryman told ANZ Bloodstock News.

“We’re supporting Akeed Mofeed heavily, but he is certainly open to outside mares as well. He covered a book of just over 70 mares last year with excellent fertility, and with this mare and the others we’ve picked up at Inglis this week he will get his chance.”

The 11-year-old Bacchanal Woman is a nine-time winner who enjoyed her finest moment when successful in the National Sprint (Listed, 1400m) at Canberra. She has three foals on the ground, including a twoyear-old Sebring (More Than Ready) gelding named Sir Bacchus.

Bacchanal Woman was one of three six-figure broodmares sold by Widden, which sold 24 broodmares, worth $1,335,150 to end the sale as the second leading vendor by aggregate behind Arrowfield Stud.

“Andrew Perryman and the Goldin Farms team have bought some lovely mares and she’ll fit in nicely amongst them.”

Widden Stud later added to their own broodmare band when going to $300,000 for Brand New Choice (Redoute’s Choice), sold as Lot 734 and in foal to Darley shuttler Dawn Approach (New Approach).

Her dam, the Group Two-placed Hanky Panky (Anabaa), is a half-sister to successful sire Not A Single Doubt (Redoute’s Choice) and the Listed-placed Natural Is My Name (Naturalism), dam of the 2007 Golden Slipper Stakes (Gr 1, 1200m) runner-up Zizou (Fusaichi Pegasus).

“Brand New Choice was a two-year-old city winner on debut, is by Redoute’s Choice, is a half to two juvenile stakes winners and is from the immediate family of Not A Single Doubt and Snippets,” McEvoy told ANZ Bloodstock News.

“She’s going to make a mighty broodmare. Like his recently retired Group One winner Bonaria, this mare will be another lovely daughter of Redoute’s Choice visiting Sebring this season.”

It was another good result for Arrowfield Stud, which also consigned top lot Flame Of Sydney and ended the sale as leading vendor of broodmares by aggregate thanks to 14 lots that sold for a total of $1,884,750.

“We’re very happy,” Arrowfield’s Andy Williams told ANZ Bloodstock News. “She was a very popular mare on the last day here. She was hardly ever in her box with a lot of inspections.

“She’s a strong mare by Redoute’s Choice out of the very good producer Hanky Panky, a sister to Not A Single Doubt, who has proven to be a fantastic sire. At the end of the day, she was a lovely type with a very strong pedigree in foal to a first season sire.”

Group Three winner Absolutelyfabulous (Langfuhr), Lot 690, will be among the second book of Three Bridges Thoroughbreds’ young stallion, the Magic Millions 2YO Classic (RL, 1200m) winner Unencumbered (Testa Rossa), after selling to the farm through Paul Willetts Bloodstock Consultancy for $260,000.

“She’s a great type of mare,” said Toby Liston, manager of Three Bridges. “After she foals down the More Than Ready she will visit our resident stallion Unencumbered, which will be a perfect cross for her mating, so there are exciting times ahead.”

Absolutelyfabulous won five races, including the JC Cameron Handicap (Gr 3, 1300m), and also ran second in the 2008 Myer Classic (registered as Empire Rose Stakes) (Gr 1, 1600m). Dam of the placed two-year-old More Than Fabulous (More Than Ready), she is as a daughter of Listed winner Joker’s Girl (Rory’s Jester), herself out of Group One winner Scarlet Bisque (Biscay).

Wayne Bedggood, general manager of Cressfield who sold Absolutelyfabulous back in foal to More Than Ready (Southern Halo), had been hopeful that the mare would reach a higher value but was ultimately satisfied with the result.

“We’re reasonably happy, we thought she might make a little bit more but it’s a fairly tough market out there and we’re happy enough with that money,” he told ANZ Bloodstock News.

“She’s a lovely big strong mare and she throws good types. Her foals have sold well so hence our expectations being a little higher. Three Bridges will be very happy with her.”

Damon Gabbedy’s Belmont Bloodstock Agency ended the sale as leading buyer of broodmares with 15 bought for a total of $1,250,000. The Chinese-based Yu Long Investments Australia also invested over a million dollars, paying $1,202,000 for five lots including the $605,000 sale-topper Flame Of Sydney.

Inglis as agent signed for Helluva Party, who was sold by Wexford Farm as Lot 826 in foal to Hinchinbrook (Fastnet Rock).

The triple-winning mare came into the sale with a notable catalogue update as a half-sister to Hysterical (Wolverton), granddam of the recent Doncaster Mile (Gr 1, 1600m) winner Kermadec (Teofilo). She is also a half-sister to Listed winner Don Bellotto (Bellotto).

Helluva Party has made a bright start at stud herself since her first foal is the Listed-placed Australia Day (Sebring).

Richard Foster was the winning bidder on Singing Adelaide, an unraced half-sister to Rosehill Guineas (Gr 1, 2000m) winner Dealer Principal (Flying Spur). She was sold as Lot 851 by Stonehouse Thoroughbreds in foal to Harbour Watch (Acclamation).

Selling continues at Inglis’ Newmarket complex tomorrow with the Classic Sale Autumn Book, after which will follow the May Thoroughbred Sale. The sale gets underway at 11am.