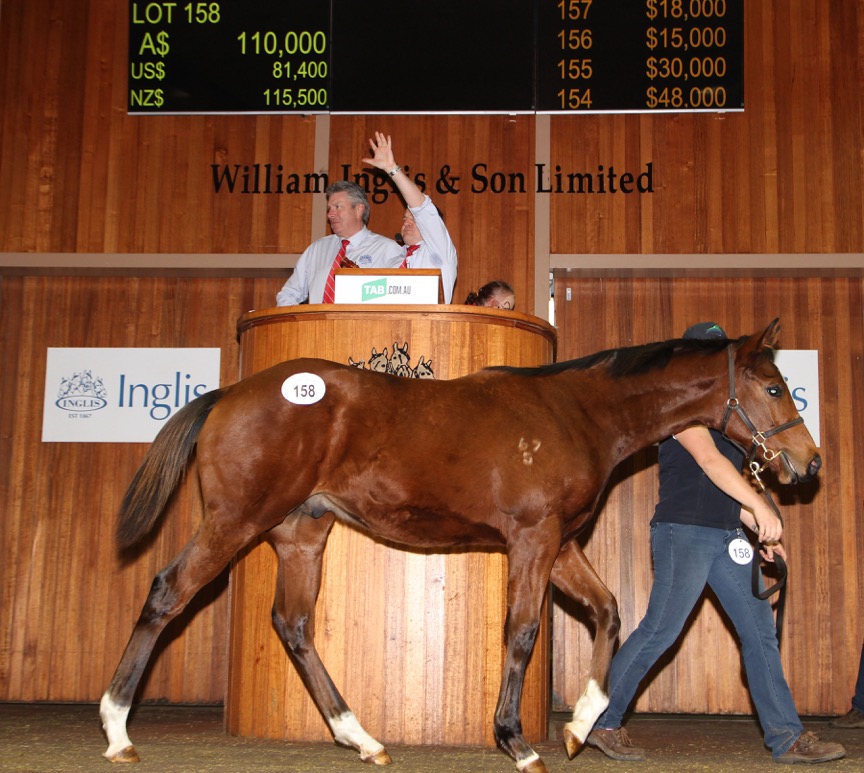 The first-ever Akeed Mofeed (GB) weanling to be offered at public auction resulted in an outstanding bloodstock sales arena debut for the foundation sire of Goldin Farms.

Catalogued as Lot 158 for the Platinum Weanling Session of the Inglis Great Southern Sale, the bay colt attracted strong interest from a number of different parties, with bidding on the quality youngster rising to six-figures in a relatively short space of time.

Competition for the colt was brought to a halt when prominent NSW-based bloodstock identity Tony Clift made a successful winning bid of $120,000 — a figure that represents close to 8-times the service fee of Akeed Mofeed.

The six-figure Akeed Mofeed weanling purchase is the sixth foal of Video Star, a stakes winner of six races including the Listed Warrnambool Cup (2360m). She is a daughter of the celebrated Epsom Derby winner Quest For Fame (GB), and was in turn produced from the Group-placed Zabeel mare Danceabeel.

The $120,000 purchase price of the Akeed Mofeed colt proved to be the highest sum received by Swettenham Stud for any member of its 17-strong Great Southern Sale weanling draft. The youngster was bred under a foal-share arrangement between Goldin Farms and Swettenham Stud, the outcome proving to be a highly satisfactory result for both parties concerned.

Broodmare owners who would like to know more about possibly using Akeed Mofeed on a foal-share basis should contact Goldin Farms’ stud manager Andrew Perryman on 0401 449 408 for further details.