Inglis topper in line for date with Akeed Mofeed 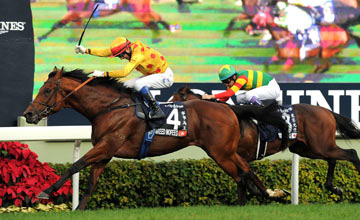 BACCHANAL WOMAN, a daughter of Encosta De Lago carrying to Sepoy, was the star attraction on the fourth and final day of the Inglis Australian Broodmare and Weanling Sale in New South Wales on Wednesday, selling to Andrew Perryman, who was acting on behalf of Pan Sutong’s Goldin Farms, for A$340,000 (£178,618/€242,136).

The son of Dubawi began his career in Europe before being sold to race in Hong Kong. His biggest win came in the Hong Kong Cup at Sha Tin.

“She’s correct, with good bone, she’s a quality horse with a great body to her, and she’s a stakes-winning sprint mare, so it was an obvious choice,” said Perryman, who manages Goldin Farms.

“We’re supporting Akeed Mofeed heavily, but he is certainly open to outside mares as well.

“He covered a book of just over 70 mares last year with excellent fertility, and with this mare and the others we’ve picked up at Inglis this week he will get his chance.”

“Vendors were rewarded by getting first crack at the weanling market and offering their fillies and mares to breeders wanting to buy at this sale so they can secure spots to the stallions that are quickly booking out at Australia’s leading studs,” said Inglis bloodstock director Jonathan D’Arcy.

“Good quality weanlings and broodmares have been well received with a lot of horses exceeding their reserves.

“Ending the sale with a total clearance rate of 80 per cent for the week is a great start to the breeding stock sales season and we look forward to trading further weanlings and mares at the Great Southern Sale in June.”

Widden Stud secured the second top lot on Wednesday, parting with A$300,000 for the Redoute’s Choice mare Brand New Choice, who was sold in foal to Darley shuttler Dawn Approach.

Brand New Choice, who was consigned by Arrowfield Stud and is a sister to stakes winner Come Hither, will be covered by Widden Stud’s exciting sire Sebring this year.