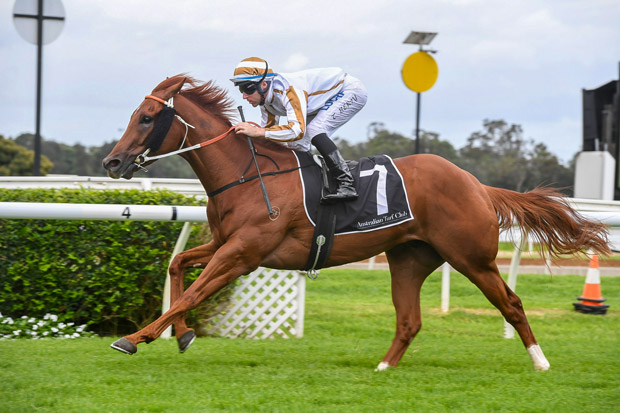 With a recent hit to prizemoney, there has not been a lot to celebrate of late for the South Australian thoroughbred industry, but one bright spot has been Goldin Farms promising stallion Akeed Mofeed (GB) who chalked up an interstate double on Saturday with a couple of three-year-olds that sported the Goldin Farm silks.

The Group 1 Australian Guineas and the inaugural $5 million The All-Star Mile at Flemington in March, could be on the agenda of the Lindsay Park-trained Poised To Strike who came back from a 22-week break to make a winning seasonal debut over 1200 metres down the Flemington straight.

Ridden by Craig Williams, Poised To Strike hit the line strongly to defeat O’Tauto (O’Lonhro) by a length with Wild Vitality (Vital Equine) a half-length back in third.

“With a dominant win like that we’ll probably just space his races so we’ve got him for the autumn.

“I’m hoping he is an Australian Guineas horse. He’s by Akeed Mofeed owned by the man that bought Lindsay Park so he’s a pretty important horse for the farm.

“He’s not very scopey but with the class and speed he’s got, I think he is a good advertisement for Goldin Farm and Akeed Mofeed (GB).

“He did his spelling there missed the spring on purpose and I really think he’ll be a contender in the autumn.”

Poised To Strike is the second foal of the imported Encosta de Lago mare Pandoro De Lago (IRE) who was one of several mares purchased by Goldin Farm to support their Hong Kong Derby winner Akeed Mofeed (IRE).

A half-sister to Group III winner Marbush (Linamix) and dual Listed winner Sublimity (Selkirk), Pandoro De Lago (IRE) is out of Fig Tree Drive, a daughter of that wonderful sire of broodmares Miswaki. Fig Tree Drive was a Newbury winning daughter of the Nijinsky mare Rose O’Riley who is a sister to the top-class mare De La Rose.

Purchased out of the Glenlogan Park draft at the 2013 Magic Millions National Broodmare Sale for $85,000, Pandoro De Lago (IRE) is the dam of the Sepoy gelding Sacred Rebel, a winner in New Zealand and Queensland before his export to Singapore.

Pandoro De Lago (IRE) has a 2yo colt and yearling filly by Akeed Mofeed (GB) and had a colt foal from the first crop of Arrowfield Stud’s Shalaa (IRE) on September 10.

At Warwick Farm, the Team Hawkes-trained Heart Conquered (photo Steve Hart ) made it back to back wins with a three and a three and a half-length romp over a 1000 metres.

“He loves it here and we are very happy with him,” co-trainer Michael Hakes said.

“They are just beautiful types these Akeed Mofeed’s. He is a lovely, sensible horse with a great attitude and he’s got the will to do it.

Goldin Farms purchased Heart Conquered’s dam Heart To Fear (Show a Heart) for $110,000 at the 2014 Easter Broodmare Sale when carrying an I Am Invincible filly.

A 7-time winner in Queensland, Heart To Fear is out of the stakes-placed Zoffany (USA) mare Zoquita. She has a yearling filly by Akeed Mofeed (GB) and a filly foal by Zoustar.

Akeed Mofeed has 11 lots on offer at Inglis Premier Yearling Sale and a further 10 at the Magic Millions Adelaide Yearling Sale.

Perfectly Poised For The Autumn
Best is Yet to Come