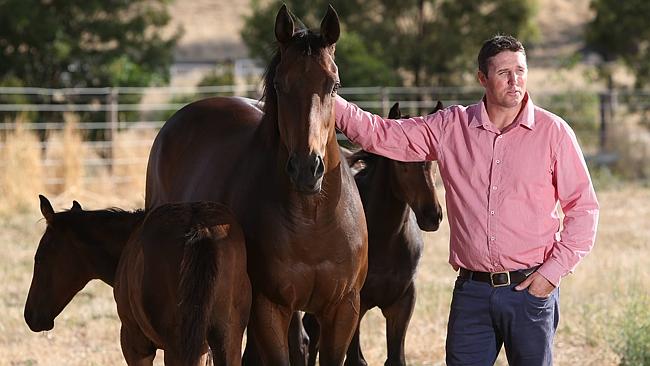 LINDSAY Park’s new owner plans to return it to its glory days, nearly 50 years after the late Colin Hayes developed Lindsay Park into a world-class horse racing and breeding operation.

Goldin Farms will be developed as a significant horse breeding operation, standing stallions and running a band of 50 to 100 broodmares owned by Mr Pan as he restores the property.

Mr Pan’s aims include redeveloping the famous horse breeding property to realise the intrinsic value it holds in the region.

It will involve selecting a significant Australian architect to oversee extensive renovations and improvements to the homestead and the development of substantial buildings befitting a major horse stud.

New stud manager Andrew Perryman said the aims include helping to strengthen the South Australian racing and breeding industry by working closely with neighbours such as Colin Hayes’ grandson Sam Hayes, next door at Cornerstone stud.

Mr Pan’s ownership of the 500ha property completes the sale of the former Lindsay Park following the move of David Hayes to a new training property at Euroa in Victoria.

It has included the sale of the 93ha racing complex to McEvoy Mitchell Racing’s Kidalton Park in 2011 and an adjoining 160ha to the Cornerstone Stud of Sam Hayes and Darren Thomas.

Mr Pan is renowned for his midas touch across electronics to property development, finance, wine production and horse racing.

He made his fortune in consumer electronic equipment, founding the Matsunichi Group in Hong Kong in 1993, producing electronic components and products for world famous brands as well as its own brand tablets, USB modems, pocket Wi-Fis and mobile phones for sale in Asia and the United States.

His company, the Goldin Group has diversified rapidly to include Goldin Properties Holdings and Goldin Financial Holdings, both listed on the Hong Kong Stock Exchange, and employing more than 12,000 people around the world.

The wine loving businessman owns three substantial chateaux in France and the renowned SLOAN Estate in the United States, while he is also a significant figure in the international polo world.

Akeed Mofeed is expected to be the foundation stallion at Goldin Farms, this Spring, or if his racing form holds, in 2015.

Mr Perryman said the business will employ about 20 people as it builds up to become a major breeding operation once again.

He is optimistic about the part Goldin Farms can play in helping to rebuild the South Australian horse breeding industry. It has already bought a dozen broodmares in Australia and owns more mares overseas including some in the United States.

Mr Pan also expects to have horses racing in Australia and Europe this year as he builds his international thoroughbred interests.

“We are deeply respectful of the historical sensitivities of the property and its place in the Barossa Valley’s heritage and we look forward to building on the Hayes family’s reputation,” Mr Perryman said.

“We plan to help strengthen South Australia as the ultimate racing and breeding state and to achieve that we will work closely with our neighbours and other partners in the state.”

Goldin Group Vice President Sean Fang said the cost of the redevelopment will depend on the appointment of an architect and the subsequent proposal.

“We believe that South Australia is an ideal equine environment for breeding and training racehorses,” Mr Fang said.

Goldin Farms will also explore the possibility of breeding polo ponies for the Goldin Group’s Tianjin Goldin Metropolitan Polo Club in China, which has been operating for three years and has more than 200 polo ponies.

But Mr Fang said the polo pony breeding plan is still very preliminary and its priority is breeding racehorses.