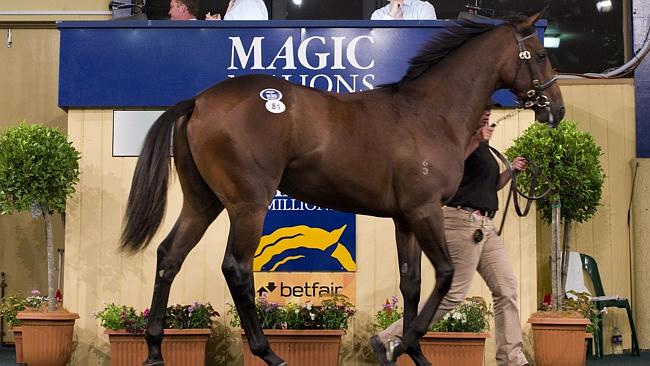 The $220,000 colt is knocked down to Tony McEvoy. Picture: Magic Millions

The South Australian horseman parted with $220,000 for Lot 81, a colt by first-season sire Smart Missile. He was the first yearling offered by Goldin Farms, the former Lindsay Park property owned by Hong Kong businessman Pan Sutong.

McEvoy and Sutong had combined earlier in the day on the racetrack when Martian, owned by Sutong, scored a dead-heat win at Morphettville on Adelaide Cup Day.

McEvoy said he had plenty of time for the Smart Missile progeny.

“I’ve looked at all of the Smart Missiles at the sales this year,” McEvoy said.

“I believe he’s really going to make it as a stallion.

“He throws a tremendous type — good bodied horses and this fellow was no exception. I thought he was very athletic this one.

“I had to fight a bit to get him, but I was very pleased we got him.”

The colt was one of four youngsters to sell for six-figure prices during the night session.

Session two kicked off with a bang this morning when former local horseman Mark Kavanagh paid $185,000 for Lot 116, a colt by I Am Invincible out of Lassie Mactavish.