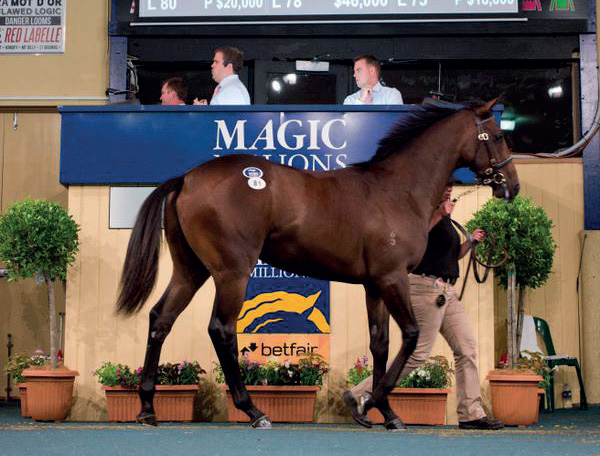 A colt by Smart Missile (Fastnet Rock) topped the first day of the Magic Millions Adelaide Yearling Sale yesterday when selling for $220,000 to McEvoy Mitchell Racing.

Catalogued as Lot 81 the colt is out of the winning Dubai Destination (Kingmambo) mare Goldfinger who is herself a half sister to the multiple Group winner Thump (Red Ransom), being out of the four-time Listedwinning mare Oomph (Flying Spur).

“He really impressed me as a horse. He handled himself very well and looks to have a lot of quality about him,” Tony McEvoy said to ANZ Bloodstock News.

“I thought he was a $200,000 (yearling), in my view, but we had to press on a little more to $220,000 to get him. It seems to be the nature of these sales at the moment, for the nice running sort of horses a lot of people want them. There has been a fight on every horse I have bought this year – its not been easy.”

“I’ve looked at all the Smart Missiles so far at the sales this year. I really like the horse, he throws a really good stamp of a horse with a lot of quality and I thought this one (lot 81) was probably more athletic than the other Smart Missiles that I’ve seen,” McEvoy said.

The yearling was the first that Goldin Farms have sold under their banner and the stud manager Andrew Perryman was happy with the sale.

“We are really pleased with the result,” Perryman said to ANZ Bloodstock News.

“We thought he was a quality colt and its good to see him go to a great trainer in Tony McEvoy.

“He is the only horse by Smart Missile in the sale and he had plenty of inspections, had a lot of vets and hits on the x-rays so we knew he was going to sell well.

“He is the first horse that we have sold under Goldin Farms and we are happy to support the Adelaide sales and support the local industry.”

Four lots sold yesterday for $100,000 or more and the second highest price came six lots after the session topper when trainer Phillip Stokes purchased Lot 87 for $110,000.

By Emirates Park-based stallion Al Maher (Danehill), the bay colt is the third foal out of the winning mare Hey Rosie (Archway) who is a half sister to the stakes placed Coldens Choice (Seul Amour) and Lakedro (Clangalang).

The highest priced filly to sell on Monday was one of the first lots through the ring, with Lot 11 a filly by Choisir (Danehill Dancer), purchased by Mark Pilkington and Andrew Noblet Racing for $105,000.

Consigned by Mill Park as agent the chestnut is the first foal out of the winning mare Brightlands Star (Starcraft). Her second dam is Eastern Charm (King’s High) who produced eight winners from as many foals to race including the Group One winner Zip Zip Aray (Bellotto) and Listed winner Zipanese (Belotto). The filly’s third dam is Dubai Lass (Bletchingly), the dam of the Group Three-placed Nicola Lass (Scenic) who produced the Group One winners Niconero (Danzero) and Nicconi (Bianconi).

“Shes by a proven international sire from a family that I know and love.

“She had some surgeries pre-sale that may have put off some purchasers, but I thought she would have held her own in any of the majors so we consider her a bargain. Andrew Noblet was thrilled to get to train her.”

Mill Park, who had sold yesterday’s Adelaide Cup (Gr 2, 3200m) winner Tanby (Galileo) as a yearling at the 2008 Inglis Australian Easter Yearling Sale, were pleased with the sale of Lot 11.

“We were very happy with the price of the Choisir filly,” Chris Watson told ANZ Bloodstock News.

“She was a lovely type and attracted many admirers.

“Thanks must go to Mark Pilkington for purchasing her. She will be raced by Darren Thomas and others and will be trained by a great up and coming trainer in Andrew Noblet.

“We wish them the very best,” Watson added.

Mill Park sold all four of the yearlings they offered yesterday at an average of $59,375.

“We have found the sale to be very strong on our lots that have good commercial appeal and are attractive types,” Watson added.

Magic Millions managing director Vin Cox is happy with how the sale has begun and told ANZ Bloodstock News: “Its been a very good start to the sale. A top price of $220,000 for a Smart Missile is very good by anyones standards and is a very exciting result.

“I am very pleased for Goldin Farms who have been great supporters of us. Domiciled here in South Australia the sale is a great result for them.

“The clearance rate of 76 per cent is satisfactory and the average is up on last year. We have a long way to go but I am pleased with the good start.”

The second day commences today at 10am.