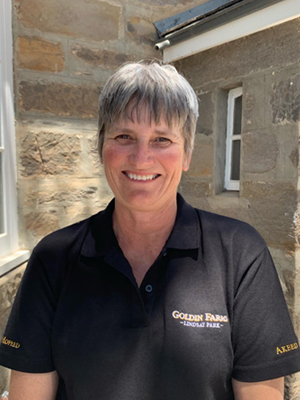 Born in the Mid North of South Australia, Lee-Anne was raised on a mixed farming operation consisting of dairy cattle, sheep and crops. She grew up riding and working with horses and quickly developed a desire to pursue a future in the thoroughbred breeding and racing industry. Lee-Anne commenced her career working as a track rider for a racing stable, and later went on to work in breeding, which is where she discovered her true passion. With now 35 years experience in the industry Lee-Anne has extensive foaling, foal handling and yearling knowledge. She has been employed across various sized studs throughout South Australia, most recently managing a private stud in Oakbank before making the move across to Goldin Farms in December 2019. lee-anneklemm@goldinfarms.com.au

Nigel Evans is a local from the Barossa Valley and has been in the horticulture industry since 1983, working in landscape, amenity horticulture, turf and land management. He was previously employed by the Hayes family at Lindsay Park as Tracks and Grounds Manager for 17 years, and stays on with the stud farm after it was purchased by Goldin Group in September 2013. Nigel also has a Diploma in Horticulture and has been employed by TAFE SA as a lecturer in horticulture.  nigelevans@goldinfarms.com.au

Hayley completed a Bachelor of Commerce at the University of South Australia in 2011, at which point she joined a professional services firm based in Adelaide. Working as a Consultant within the risk advisory practice, Hayley developed a broad range of professional and interpersonal skills, gaining experience in areas including legislative and regulatory compliance, policy management, work health and safety, and performance and management reporting. Having grown up on the outskirts of the Barossa, her passion for both the local area and horses quickly drew her attention to Goldin Farms, where she joined Goldin Farms since September 2014.  hayleyharnath@goldinfarms.com.au