Goldin Farms and Swettenham Stud are pleased to announce that Akeed Mofeed (Dubawi), a rising star of Australia’s stallion ranks, will relocate to Nagambie to join the Swettenham Stud roster for the 2019 season.

I have said it last time and I’ll say again, these Akeed Mofeeds are great horses to train with great attitudes.”

Heart Conquered stopped the clock at a flying 56.01s, breaking the six-year-old track record by more than 0.5s

The Group 1 Australian Guineas and the inaugural $5 million The All-Star Mile at Flemington in March, could be on the agenda of the Lindsay Park-trained Poised To Strike who came back from a 22-week break to make a winning seasonal debut over 1200 metres down the Flemington straight.

Having sired a metropolitan winning two year-old for the past three Saturdays running, Goldin Farms’ Akeed Mofeed (GB) is emerging as a serious young sire to watch

Goldin Farms would like to welcome you to our 2018 Stallion Parade on Sunday 29th July as we celebrate the success of Akeed Mofeed’s first 2 year olds.

South Australian based stallion Akeed Mofeed is beginning to make his mark too and appears to have a genuine contender for Group One glory in the spring via unbeaten filly Assertive Play.

We are right on the Akeed Mofeed (GB) bandwagon and here is another reason why – his two-year-old daughter Assertive Play kept her record at a perfect two for two…..

Ridden by Dom Tourneur, Assertive Play displayed an impressive turn of foot and despite her greenness proved a long-neck too good for the odds-on favourite Thorondor (Fastnet Rock) with Crockett (All American) doing his best work late to finish a further long-neck back in third.

Heart Conquered, in his second race start, cruised in over 1000m at Morphettville on Saturday in the Holdfast Insurance Handicap for 2 year olds.

Supporters of Goldin Farms foundation stallion Akeed Mofeed (GB) have good reason to take great heart from last weekend’s result of the Group 1 ATC Australian Oaks (2400m) as it continues the very favourable impression the Dubawi sireline is making on the local racing scene. A sire-son of Dubawi was responsible for his second consecutive winner of the ATC Australian Oaks when Bonneval (NZ) posted a stunning four and half lengths success in the 2017 renewal of the region’s premier fillies Classic.

Goldin Farms has implemented significant changes to our Angaston management structure and made two very notable additions to our senior personnel due, in part, to the fact that over 40 Akeed Mofeed (GB) home-breds are about to embark on their racing career…..

The familiar yellow and red racing livery of Goldin Farms were again carried with great distinction by Gold-Fun when the star Hong Kong-based galloper finished a courageous runner-up in the Group 1 Diamond Jubilee Stakes at the 2016 Royal Ascot meeting.

The first-ever Akeed Mofeed (GB) weanling to be offered at public auction resulted in an outstanding bloodstock sales arena debut for the foundation sire of Goldin Farms.

It was home to some of Australia’s most successful racehorses, now South Australia’s former Lindsay Park property has a crop of new arrivals. On the former thoroughbred racing stud known…

Say hello to the first foal of Goldin Farms’ exciting foundation stallion Akeed Mofeed. Saturday, August 1 was the horse’s birthday signifying the impending arrival of foals over the next…

Bloodstock.com.au
First year of operation
29 May 2015

Goldin Farms recently completed its first year of operation and our initial objectives have been met on many fronts. Besides settling in to one of the most famous horse properties of the…

BACCHANAL WOMAN, a daughter of Encosta De Lago carrying to Sepoy, was the star attraction on the fourth and final day of the Inglis Australian Broodmare and Weanling Sale in New South Wales…

Round Table Racing celebrated its first winner with Mr Boomsday at Canterbury on Wednesday and the victory was also a fillip for Goldin Farms. Another industry newcomer, Goldin Farms owns Cashcade – the dam of Mr Boomsday…

Akeed Mofeed, multiple Group One winner of both the 2013 Hong Kong Derby and 2013 Hong Kong Cup, has been retired from racing and will stand at Goldin Farms, Lindsay Park in South Australia. Andrew Perryman, stud manager at… 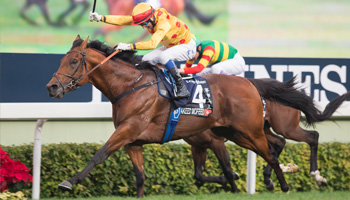 Akeed Mofeed is a thoroughbred racehorse trained in Ireland by John Oxx and arrived in Hong Kong in 2012. In Hong Kong he was trained by Richard Gibson. He is notable for winning the BMW Hong Kong Derby 2013 and the Longines Hong Kong Cup 2013...